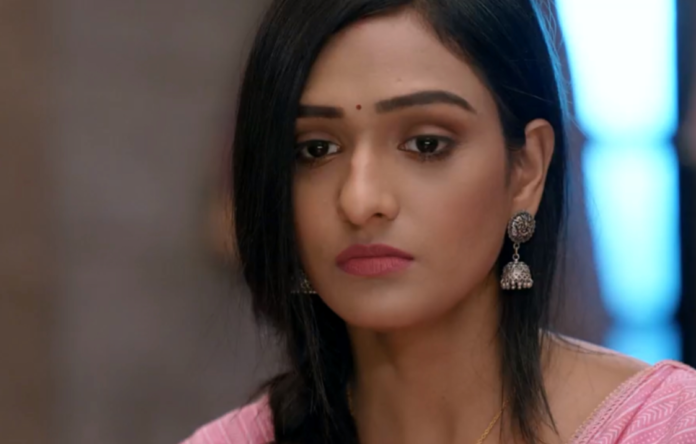 The episode starts with Neelam and the rest of the family eating Lakshmi’s laddoo and Neelam says they are not sweet and ruined her tastebuds by eating it. The family also eats and Karishma says she doesn’t like sweets and Sonia does the same. Ayush, Dadi enjoys the sweets. Malishka is about to take one while Lakshmi asks her to stop and asks her not to eat it as she doesn’t like sweets. Rishi also asks Malishka not to and Malishka gets angry.

Lakshmi looks at Rishi enjoying the sweets and smiles at him. Rishi asks her not to smile and Lakshmi asks him what does he want to eat for lunch? Rishi tells her that he’d eat whatever the chef has made and Lakshmi drags in the judge and reveals how they should be spending time together. Rishi asks her to bring lunch at sharp 1.30 pm or he’d eat whatever the chef has prepared.

Ayush and Rishi leave for work, Lakshmi goes to the kitchen to prepare food and remembers Vijendra’s words and feels sad. She feels bad for breaking Vijendra’s trust by signing the divorce papers. She gets a call from Shalu and Shalu asks if she can come and Lakshmi invites her. Malishka comes there and asks Lakshmi to stop her antics and Lakshmi asks Malishka to stay away from her married life.

Malishka says Lakshmi is trying to trap Rishi for money and Lakshmi asks her to think whatever she wants to and says she will not leave Rishi this time. Malishka says Rishi doesn’t love her anymore and Lakshmi catches a point that Rishi used to love her but Malishka still came in between them.

Lakshmi warns Malishka not to create disturbances in her married life or she will have to file a complaint against her. Malishka asks Lakshmi to stay within boundaries and blames Lakshmi’s upbringing. Lakshmi gets mad hearing the same and warns Malishka not to talk wrong about her family. She says her parents brought her right that is the only reason Malishka is still standing her or she would have thrown Malishka out a long time back.

Malishka gets angry and breaks a glass while Lakshmi asks her not to do that again or she would have to go to the market and buy the glass. Lakshmi asks what is Malishka doing talking to her if she believes that Rishi loves her the most. Lakshmi asks Malishka to let Rishi choose who he wants to be with. Malishka fumes in anger and leaves from there. Malishka goes to Karishma and lies about how Lakshmi wants Rishi just for money.

Malishka gets angry thinking about Lakshmi’s words and informs Karishma how Lakshmi is trying to impress Rishi by cooking. Karishma then asks Malishka what is she waiting for and asks her to ruin Lakshmi’s cooking. Malishka says Lakshmi has changed and she is not leaving the kitchen and Karishma says she would help her.

On the other hand, Ayush comes to Rishi’s cabin and finds him worried and asks him the reason. Rishi reveals how he has a meeting at 1.30 pm and Lakshmi would also reach at the same time. He asks should I call her now and Ayush replies by saying who eats lunch this early?

Precap: Karishma reaches the kitchen and throws down the curry pot while Malishka smirks looking at the same. Lakshmi reaches the office to see Rishi dining with Ayush and Malishka. Rishi looks at Lakshmi and goes to her and kisses her hand while Malishka burns in anger.