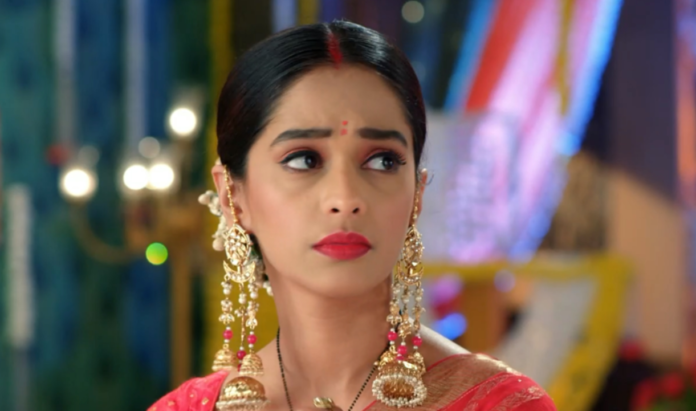 The episode starts with Rhea trying to open Nick’s ropes and instructs him to go to Sahana’s room and abduct her. Everyone comes there, while she acts as if Nick pushed her and Nick rushes inside. Nick thinks of Prachi as Sahana and asks her to shut her mouth and come along. Prachi asks him not to hurt her and Nick realises that she is Prachi and he says he would stab her in the stomach if tries to act smart.

Prachi asks him not to stab in the stomach and starts panicking, Ranbir comes there and Rhea tries to stop him but he goes to look out for Nick and Rhea starts to panic. Ranbir looks out for Nick but couldn’t find him or Prachi anywhere in the house and Sahana finds Prachi’s ring on the floor and gets worried for her. She comes out and informs everyone that Prachi is missing.

Sahana says she will go turn on the main and get Aliya out and Pallavi gets shocked to know that Aliya has turned the main off while Rhea covers it up for Aliya. Pallavi asks how is her hand and checks the injury, she doesn’t find any injury on Rhea’s hand. Rhea lies to her saying it is an internal injury and Pallavi asks her to rest.

Nick ties up Prachi and calls Rhea and asks if she should kill Prachi and Rhea agrees on the same. Nick asks for huge remuneration and Rhea says she will send him the money. Rhea goes to find Aliya and asks what is she doing here and reveals how Nick has captured Prachi and is demanding money to end her life.

Ranbir looks at Prachi being taken away by Nick and runs after the cab while he couldn’t catch up with the same. Rhea asks Aliya that she will go and give the money to Nick but how will she get the bag from the living room. Aliya says she would throw the bag out and asks Rhea to wait outside.

Pallavi blames Prachi for everything and Sahana lashes out at Pallavi for always blaming everything on Prachi. Pallavi blames Dida for giving Sahana so much freedom that she started arguing against her. Dida supports Sahana and asks Pallavi to start accepting the truth if she wants to speak the truth always. Vikram asks them to stop and worry about Prachi now as she is in danger.

Sahana says she will go out to find Prachi and leave. Rhea is waiting for Aliya to throw the bag outside and Aliya acts as if she is not feeling well and asks Dida to request Pallavi to get her some warm water. Everyone leaves and Aliya finds a chance to throw the bag out while Sahana listens to the sound and goes out to look for it. Rhea stops her and says she will come along to find Prachi. Sahana accepts and they both leave while Rhea acts as if she has twisted her leg.

Precap: Prachi says she will pay Nick how much ever money he wants and requests him to leave her. Ranbir will be seen coming to Nick and asking him to name a price to leave Prachi.